How can you limit the damage caused by inflation

Robin Powell
Oct 31, 2022 10:00:46 AM
One word has dominated the economic headlines in 2022 — inflation. Around the world, prices have risen far faster than forecasters were expecting, as a result of knock-on effects from the Covid-19 pandemic, the war in Ukraine, and strong consumer demand. 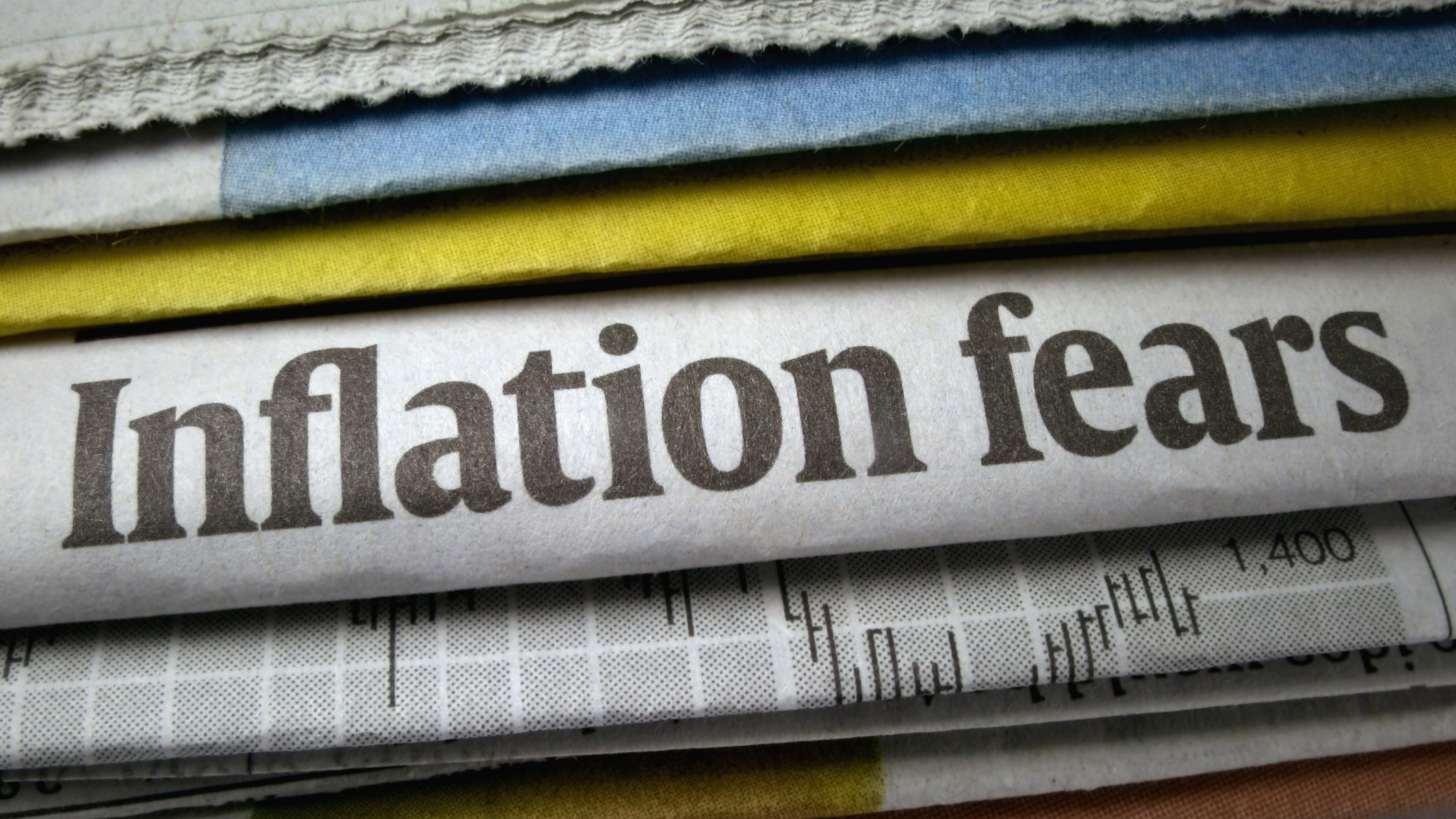 One word has dominated the economic headlines in 2022 — inflation. Around the world, prices have risen far faster than forecasters were expecting, as a result of knock-on effects from the Covid-19 pandemic, the war in Ukraine, and strong consumer demand.

The UK inflation rate was 9.9% in August, down from 10.1% in July (1).  These levels have not been seen for 40 years, and it’s not surprising that investors are concerned about the impact of inflation on their portfolios.

2022 has been one of the toughest years on record for investors. That’s because, unusually, bonds have fallen in value as well as equities. As a result, all investors — cautious, balanced and adventurous ones — have been badly hit. Financial advisers and investment consultants who claim to have shielded their clients from these market falls, almost certainly haven’t.

The question is, what should investors do now, given the inflationary environment we find ourselves in?

The temptation at times of great economic uncertainty is either to flee the markets altogether or to succumb to the siren song of fund managers, as well as many advisers and consultants, and sign up for an expensive active investment strategy.

But new research by Global Systematic Investors suggests that sticking with a broadly passive, evidence-based approach is much more sensible(2). Here are four key takeaways from the GSI study:

1. It’s likely you will be negatively impacted

The bad news is that whatever you invest in, it probably won’t insulate you from the effects of inflation. Cash is an obvious example. Bonds fall in value too, as a direct result of increasing yields.

Normally, bonds and equities are negatively correlated; in other words when bonds fall, equities tend to rise. But inflationary periods are an exception. Rising prices increase economic uncertainty, and companies are often unable to pass on the increased cost of raw materials to their customers, which in turn reduces profits.

Needless to say, things would be so much simpler if we knew, in advance, how much further prices would rise or how long inflationary periods would last for. But it’s extremely difficult to tell. Some forecasters are very downbeat, others more optimistic, and they can’t all be right.

A US study in August 2021 showed that higher inflation (roughly rates of more than 5%) is sometimes temporary, lasting just a few months (3). But there are several examples of high-inflation periods lasting at least two-and-a-half years. On two occasions since the Second World War, they’ve lasted around four years. The most recent example came in the economic boom of the late 1980s.

Indeed, while forecasters believe that inflation has already peaked in some countries, we may still be some way off that point in the UK. The Bank of England has forecast that inflation will peak at around 13% by the end of this year and will continue at “elevated levels” through 2023 (4).

It’s almost always a bad idea to sell once prices have already fallen sharply. Why? Because eventually markets recover, often quite quickly, and it’s very hard to predict when prices will start rising again. As the chart below demonstrates, US equities in particular tend to rebound strongly after inflationary periods. For example, in the two years that followed the crisis caused by the OPEC oil embargo in the early 1970s, US stock markets rose almost 30%.

Of course, inflation could persist for longer than analysts anticipate. But, by the same token, it could ease off far sooner. If you switch into cash now, it might provide you with some emotional relief in the short term, but it could mean missing out when prices recover. 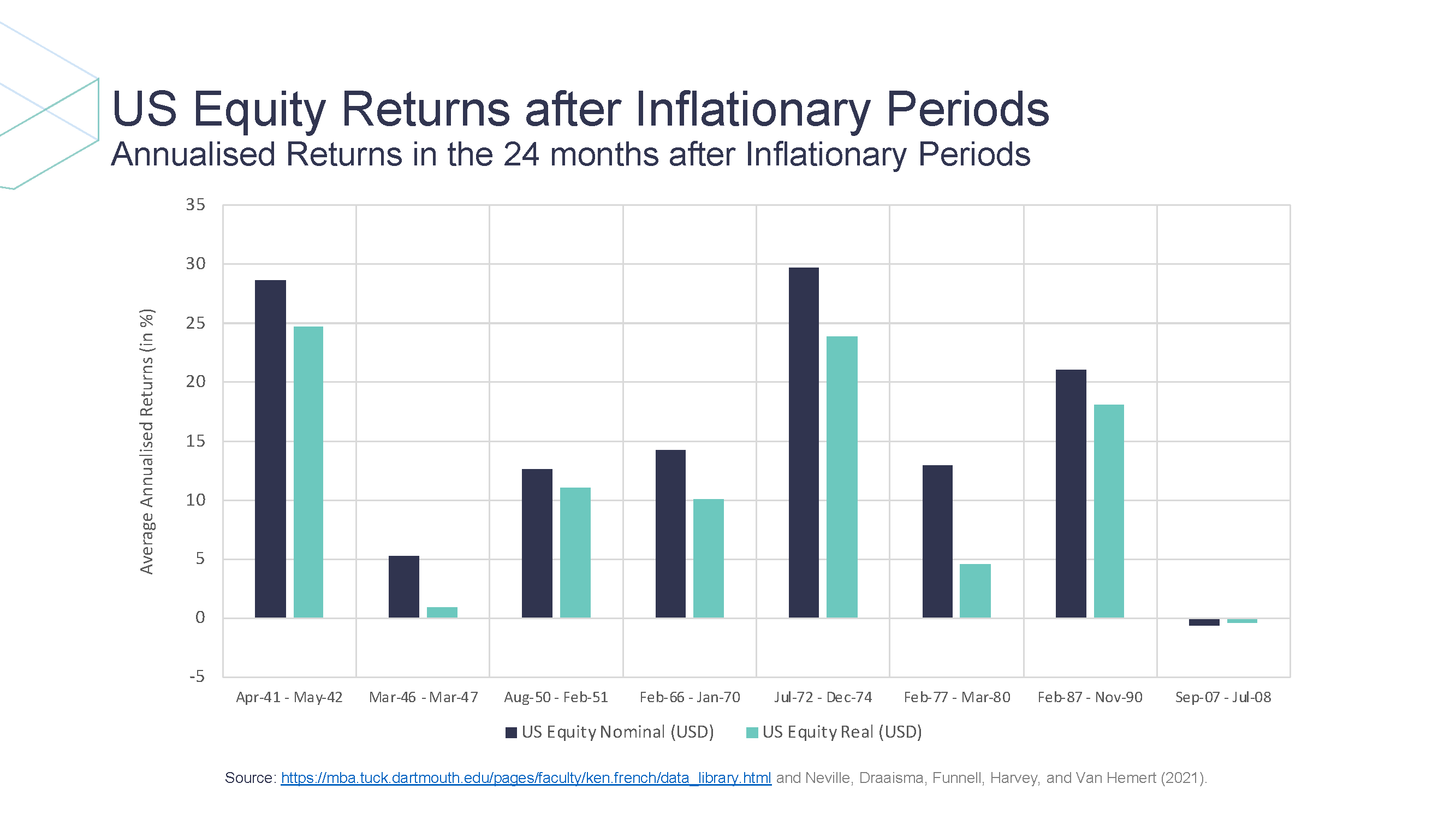 4. A diversified, factor-based approach is the most rational

As I’ve already explained, most major asset classes are negatively affected by inflation. But is there anything you can do to try to reduce the damage? GSI’s research suggests there is.

Bernd Hanke, the study’s author, says: “The best strategy in times of inflation is to stick with an asset allocation that gives you the highest expected risk-adjusted return overall. Global diversification can help protect returns. You can also use a factor approach as a potential cushion.”

Factor-based investing means increasing your exposure to different risk “factors” which, research has shown, tend to produce higher returns over time. These include small companies, value stocks and companies with high profitability. As the chart below shows, focussing on factors has been a successful strategy over time, regardless of inflation.

These are uncomfortable times for investors, and the sad fact is that fund managers, and even many financial advisers, will try to exploit that discomfort and sell you a strategy that appears to provide a solution.

But, as we’ve said before, no one has a crystal ball — either about inflation and the economy, or the future direction of the financial markets. The best approach is to stay calm and disciplined, and to stick to a strategy that’s founded on data and evidence.

This article is produced by us for Financial Advisers who may choose to share it with their clients. Timeline Planning and Timeline Portfolios do not offer direct-to-consumer products

Simple arithmetic that explains the superiority of indexing

From London to Sydney, active funds are struggling